As a result of the war on the territory of Ukraine, hundreds of thousands of people were left without work, livelihoods, lost their permanent place of residence, stability.

People have to start life from scratch, change their specialization in order to find a job. Without constant income, it is very difficult.

So Khmelnytskyi's charitable organization launched the Support for Ukraine project. It is designed to help forced migrants and residents of Khmelnytskyi who have lost their jobs:

Courses are presented in the most relevant areas:

Training is conducted by teachers with 5 years of experience. All material needs of people's education are covered by charitable contributions. The fund is supported by state and public organizations.

Tasks for creating a site

The organizers of the project turned to our team with the task: to develop a convenient, understandable, effective site for collecting funds for charity, publishing reports on the work performed.

The site should close all possible objections of the user, increase the loyalty of the audience, encourage them to make a charitable contribution.

Khmelnytskyi, all of Ukraine, Europe

Charitable organization: training of displaced persons and assistance in finding a job

We held a briefing with the customer, found out detailed information about the courses, teaching staff, payment options, official documents, certificates. Subsequently, they conducted an audit of the websites and social networks of similar charitable organizations. We studied the comments of users to understand the main pains, objections, possible reasons for their mistrust. We evaluated the visual design of competitors’ resources, compiled a table with a list of pros and cons of the UX/UI part of the design. Based on the results of the completed work, a meeting was held to form an action plan, the general concept of the site, discuss the details, and reach a single decision. Site prototyping Site prototyping was the most important task during our work. The sequence of blocks on the main page should interest the user, involve him in the problem, inspire trust, and push him to the target action. We developed a prototype site in Axure. The blocks were located as follows:

The Help button is repeated in different blocks. It all depends on at what stage a person will have enough arguments to join. Other pages of the site supplement the information of the main page. All data is confirmed by figures from official sources, documents, reports.

The designer worked on the project, who herself is an immigrant from the city of Kherson. She thought through all the design details and prepared the site design for the mobile version and PC in Figma. The design is developed in muted tones with an emphasis on the patriotic national colors of Ukraine. Design is simple, concise, clear. Does not distract attention from the main information, live photos and videos. 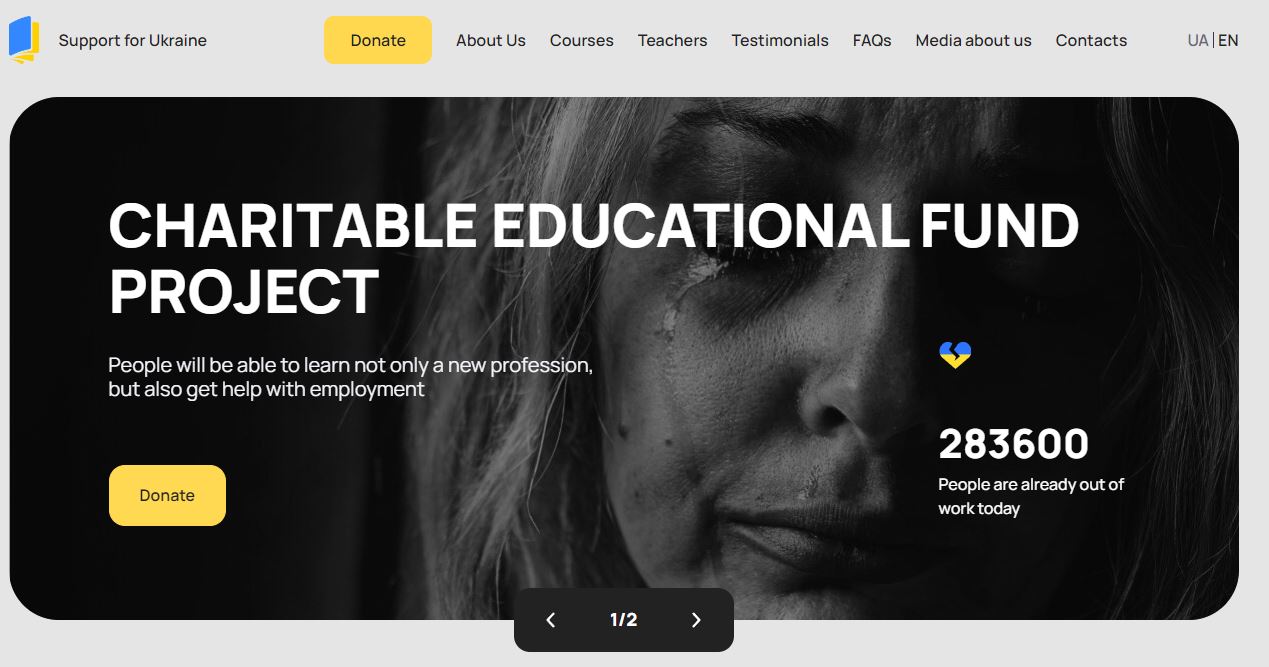 The site was created on CMS WordPress. This made it possible to make it simple, but quite flexible in settings. During the development process, a lot of attention was paid to creating various convenient ways to make donations. We have added convenient payment methods to the site:

All functionality was tested. Only then was the site launched.

The result of the work

We managed to develop an effective, simple, functional site where people can:

Thanks to the site and the active work of the foundation, it has already been possible to receive several grands and graduate 1-2 groups of students in each course!

Do you need a website for a charitable foundation? Leave a request and we will contact you as soon as possible!